The 10 most spicy chili peppers in the world

Indice nascondi
Lift your Hand if you ever bet to be able to eat very spicy chili peppers without turning red or crying.

And maybe you even won that bet, but did you ever think of which could be the spiciest peppers in the world, other then the ones you usually buy or your grannie makes?

Let’s begin by stating that this varieties are most likely not used in restaurants or our kitchen, as it would cause a rise in mortality rate. It’s nearly impossible to eat these spicy bombs and not suffocate instantly, obviously our Sliced hot chili peppers in our products is of Apulian origin and not at these levels, which makes it a great spicy level to still enjoy your meal with that bit of kick.

But let’s start at the beginning.

Do you know that there is a scale that measures the pungency (spiciness or “heat”) levels of chili peppers?

The pungency (spiciness or “heat”) levels of chili peppers are measured via the Scoville scale.

What is the Scoville scale?

The Scoville scale invented by Wilbur Scoville over 100 years ago, precisely in 1912 is the unity of measure  (in SHU (Scoville Heat Units)) of the pungency (spiciness or “heat”) levels of chili peppers. The chili peppers are fruits of the Capsicum family and contain some substances known as capsaicinoids, like the Capsaicina for example which stimulates the nerve ending that are situated underneath the tongue and communicate that sensation of heat or burning to the brain.

The Scoville test was originally an organoleptic test, which was made by preparing an extract of the chili pepper, diluted in water and sugar until that burning sensation was not perceptible anymore. Easily put it was depend of the sensibility of the test people.

Today, the methods are much more sophisticated, like the HPLC  (High performance liquid chromatography, known as the “Gillette method”) method., which measures directly the amount of capsaicinoids without the sensibility of the human being.

The highest level of the scale is 16.000.000 SHU, which equals the pure capsaicina. The Scoville scale, indicates the quantity of capsaicina within the chili peppers.

Know that we know how the pungency of chili peppers is measured, let’s find out which are the spiciest in the world.

Furthermore, at the bottom of the page you can find and infographic of the most spicy peppers in the world to help you visualize better.

The top 10 of the spiciest peppers in the world

In decreasing order, we present you the most spicy peppers in the world, starting our very own italian chili pepper.

Let’s begin to say that it is not enough to just say the chili pepper from Calabria, as it has its’ self many varieties.

For example there is the one round like a cherry tomato, the horn shaped one, also know as the chili pepper from Soverato or the little devil, known as Calabrese in bunches.

The hot chili pepper represents a medium pungency that measures around 30.000 SHU and is 2-3 cm long. It reaches its final ripening with the intense red coloring. Its used both raw and dried and often to add seasoning to various spicy typical sausages, like soppressata, spianata or the famous spread ‘nduja.

Most of you have probably had the possibility to try this pepper, so it might be easier to compare the level of pungency with the other products.

Level of pungency of the red hot chili pepper from Calabria is 30.000 SHU

The name refers to the city Cayenne, departmental capital of French Guiana in Central America.

This variety of peperoncino is mostly used dry or freshly picked and toasted but ultimately grinded, that is why it is most known as Cayenne pepper. Due to its popularity it is grown and harvest almost everywhere in the world, also in Italy.

Its color is bright red and it can be 2 to 5 cm long. Mostly it’s used in the kitchen as grinded pepper and is rich in potassium, alcium, beta carotene, vitamins A, C and E and capsaicin.

Level of pungency of the Cayenne pepper is 50.000 SHU

. It is harvest in Perù and Bolivia where it is known as rocoto or locoto pepper since thousands of years and has a typical red coloring, whilest the yellow variety is more common in the Caribbean or Mexico.

As you can see on the picture the consistency of its flesh is much more thicker than that of other peppers and its seeds are very dark or black.

The Manzano pepper is a perennial plant, capable of bearing fruit on average 3 times a year.

Scotch bonnet, also known as bonney peppers, or Caribbean red peppers is a variety of chili pepper named for its resemblance to a tam o’ shanter hat. Mostly harvest in the Caribbean islands but is also known in Guyana, where it is named “ball of fire”, and it can be of either red, orange or yellow coloring.

For the most part the Scotch Bonnets have a pungency level between 100.000 and 350.000 Scoville units, but you can also find some mild varieties called Cachuchas and mostly grown on the Caribbean islands.

Level of pungency of the Scotch Bonnet pepper 200.000 SHU

Perhaps the most famous among the hot peppers is the Habanero pepper, probably the best known due to its advertising in various Mexican restaurants.
Habanero is part of the Capsicum chinense pepper family, one of the main 5 varieties of the hottest Capsicum genus in the world. Typically harvested in the Yucatan peninsula in Mexico,although the name Habanero derives from Havana, the capital of Cuba from which it is believed to be originated, where you can also surprisingly find orange varieties, but the most interesting cultivation for this specialty of chilis is in Mexico.

As you can see in the photo, the Habanero has a variable length between 2 and 8 cm, its shape closely resembles a lantern and its degree of spiciness for the red Habanero varies on average around 350,000 SHU. You can buy habanero spread in the red or yellow variety here on our online store.

Level of pungency of the Habanero pepper 350.000 SHU

The Habanero Red Savina is part of the Capsicum chinense family, as well as the “more evil” brother of the Habanero mentioned above, not surprisingly the spiciness champion in the Guinness Book of Records as the hottest pepper in the world from ’94 until 2007 to then be ousted by the Naga Jolokia, the next chili pepper in our Top Ten.
The Habanero Red Savina occupies the 5th position, ranking with its peak of 855,000 SHU. This variety was discovered almost by accident, as it was discovered on an orange Habanero plantation, after which it was isolated and then re-planted.
On average, the spiciness of Red Savina, “roughly the same size as it’s brother” varies from 350,000 to 850,000 SHU.

Level of pungency of the Habanero Red Savina 850.000 SHU

The Bhut Jolokia chilli, also known as the Holy Pepper, is believed to be originated in India. The name Bhut, given by the Bhutias people, means “ghost”.
In 2000, scientists from India’s Defense Research Laboratory (DRL) rated Bhut Jolokia at 855,000 on the Scoville scale, and in 2004 an Indian export company with the Frontal Agritech measured an incredible 1,041,427 Scoville score, making it in actually twice as hot as Habanero Red Savina.
As you can see in the photo, the Bhut Jolokia has an elongated shape of 4 – 7 cm and a wrinkled skin.

The Naga Morich, also known as “The Snake”, comes from southern Bangladesh.
As you can see on the photo, it has a “wrinkly” structure like the Bhut Jolokia, displayed above, but the Naga Morich is smaller and characterized by ribs on the outside peel. It can reach the size of 6.5 in length. its color ranges from light green to red when fully ripe.
The flavor is less earthy than a Bhut Jolokia but the spiciness is much higher, we have exceeded 1,000,000 SHU.

Now things are getting serious, not that we were joking before but are you ready to meet the vice world champion of pungency among the hot peppers?
It was 2012, when the Guinness Book of Records officially declared “Trinidad Moruga Scorpion” the hottest pepper in the world.
The extreme spiciness of the Trinidadian Scorpion has been calculated at 2,000,000 Scoville units, almost half the pepper spray that the military and police are equipped with.
Originally from the “Trinidad and Tobago” island state of Caribbean Central America, it is the size of a golf ball as soon as it is harvested (doesn’t it also look a bit like Toad the mushroom friend of Super Mario Bros Ed.). His skin, like the two previous chillies, is wrinkled, and most of all fire red.
Someone who has had the audacity to taste it claimed to have perceived a pleasant taste except for the delayed and devastating effect of its spiciness. We’re not sure he made it: P
Fun Fact: The Trinidad Moruga Scorpion is so powerful and “angry”, that its powder even managed to get through the researchers’ latex gloves causing unpleasant irritation.

Ok if you have made it this far, it is because you are curious to find out which is the highest degree of spiciness that a chili pepper can reach,

1. Carolina Reaper the hottest chili in the world

The Carolina Reaper is a hybrid chili of the Chinense Capsicum species, (the hottest pepper family that exists) originally codenamed “HP22B”, grown by Ed Currie, who runs the PuckerButt Pepper a pepper company in South Carolina.
With an average of 1,569,300 SHU on the Scoville scale and peak levels of over 2,200,000 SHU, the Carolina Reaper is the hottest pepper in the world awarded in the 2013 Guinness World Records.

The 10 hottest chillies in the world in an infographic.

For a better overview, we created for you an infographic picturing the ranking of the 10 hottest chili peppers in the world, starting as a reference from the Calabrese Peperoncino (the most commonly used in italy), up to the top, with the Carolina reaper, bearing in mind that the data shows the peaks of certified values and not an avarage. The various hot peppers can vary their spiciness depending on the place of cultivation.
Infographic of the 10 hottest peppers in the world 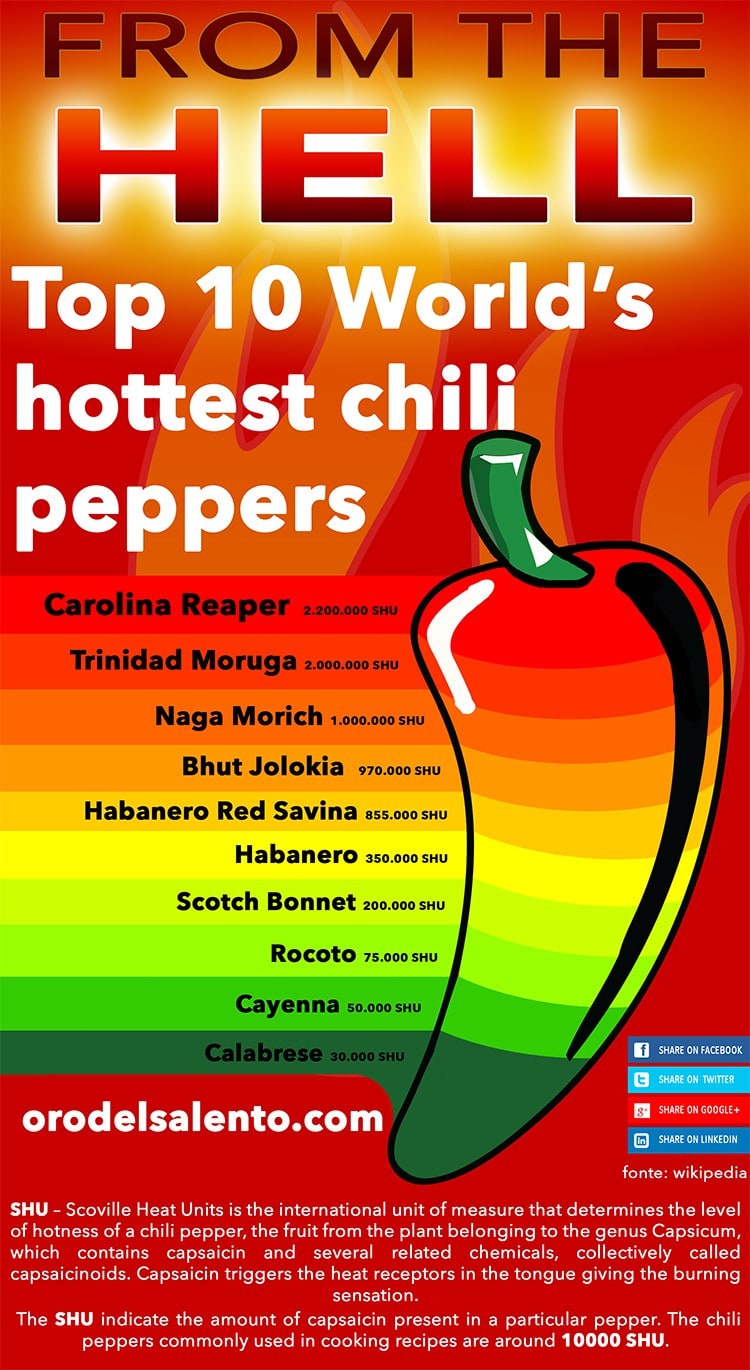 Do you want to taste our products?
Subscribe to our newsletter and we will send you a 10% discount for your first order.